“A great fantasy tale of love and brutal faces two characters: one female, Moon and one male Mars. Two rival families with individual strengths of each side of the city, which suffers the consequences of that passion. A violent and romantic history leading to revelation, an eastern-flavored story in a gothic world, tragic, and anod to the demise of Sodom.” 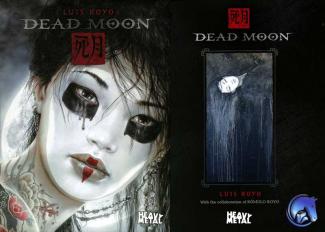 There was so many beautiful drawings in Luis Royo’s book. The artwork was just fantastic, but I think the story just went on a little bit to quickly, so a bit more background info(meaning more artwork) would be great.

The female on the cover is of course Moon and during the whole book you will get to see her in many different outfits as well as nudity, and her counterpart is Mars which is a warrior. They have a love-and-hate relationship and you didn’t get to see them interacting until the end when they give in to their passion. The artwork were very detailed and very realistic with an asian touch that it just got me turning page after page.

Here you can see only part of the art book  for your reference, but you can Download Luis Royo – Dead Moon PDF in full size and excellent quality​